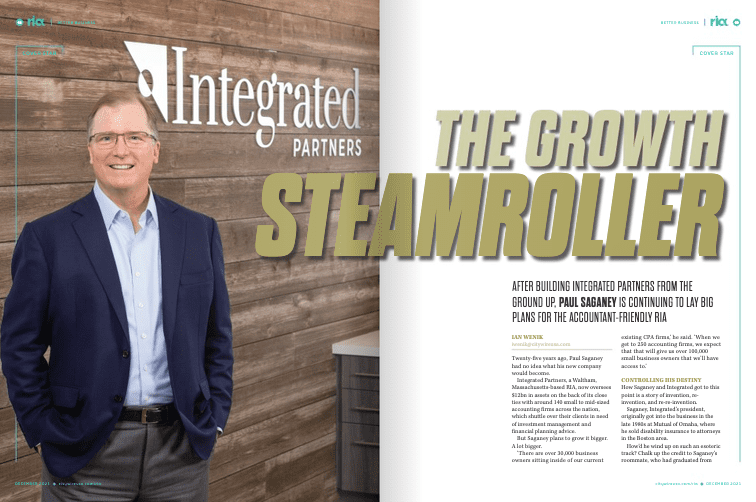 Saganey is continuing to lay big plans for the fast-growing, accountant-friendly RIA.

Twenty-five years ago, Paul Saganey had no idea what his new company would become.

Integrated Partners, a Waltham, Massachusetts-based RIA, now oversees $12bn in assets on the back of its close ties with around 140 small to mid-sized accounting firms across the nation, which shuttle over their clients in need of investment management and financial planning advice.

But Saganey plans to grow it bigger. A lot bigger.

‘There are over 30,000 business owners sitting inside of our current existing CPA firms,’ he said. ‘When we get to 250 accounting firms, we expect that that will give us over 100,000 small business owners that we’ll have access to.’

Saganey, Integrated’s president, originally got into the business in the late 1980s at Mutual of Omaha, where he sold disability insurance to attorneys in the Boston area.

How’d he wind up on such an esoteric track? Chalk up the credit to Saganey’s roommate, who had graduated from college a few years earlier and had gone down that exact path.

‘Coming out of school and seeing how well he was doing; he was building an entrepreneurial business that really caught my attention,’ Saganey said. ‘I was interested in controlling my own destiny rather than working for somebody else. That was really exciting for me.’

Frustrated by the narrow nature of insurance sales, Saganey started to learn more about estate planning work and jumped to join a close friend, Peter Gaines, at CIGNA Financial Advisors. 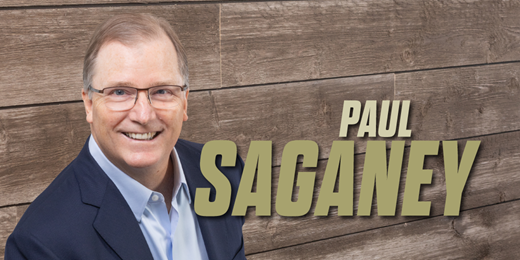 ‘A sense of frustration got me into the wealth management part of the business,’ he said. ‘Back in the days at CIGNA, we were doing all the estate planning for Morgan Stanley, Smith Barney, Dean Witter. When we would work on those clients, we would generate our revenue from doing a fee-based financial plan and placing any life insurance. But we would give all the assets back.’

‘As we saw more and more financial advisors building out their wealth management arms of their practices, we thought: “Wow, why don’t we take what we were doing so well in the wirehouse community and lay that on top of a couple of large accounting firms here in New England?” We could offer the estate planning, the financial planning, but then we could manage the wealth at the same time.’

Saganey founded Integrated Partners in 1996, which at the time was affiliated with VeraVest, the broker-dealer arm of insurance company Allmerica Financial.

‘When I jumped into it, It was just me, all by myself,’ he said. ‘I ran out the door, I had a few accounting firms and it was just me and we had a dream of building something else. It truly was a scratch business.’

Allmerica’s telemarketing chassis helped give Saganey a built-in marketing engine, but he was forced to move in 2003 when the company abruptly shuttered its brokerage business, forcing Saganey and 800 other colleagues to find new homes.

Saganey and his team of 21 advisors elected to join Lincoln Financial, where he would remain affiliated for 13 years. 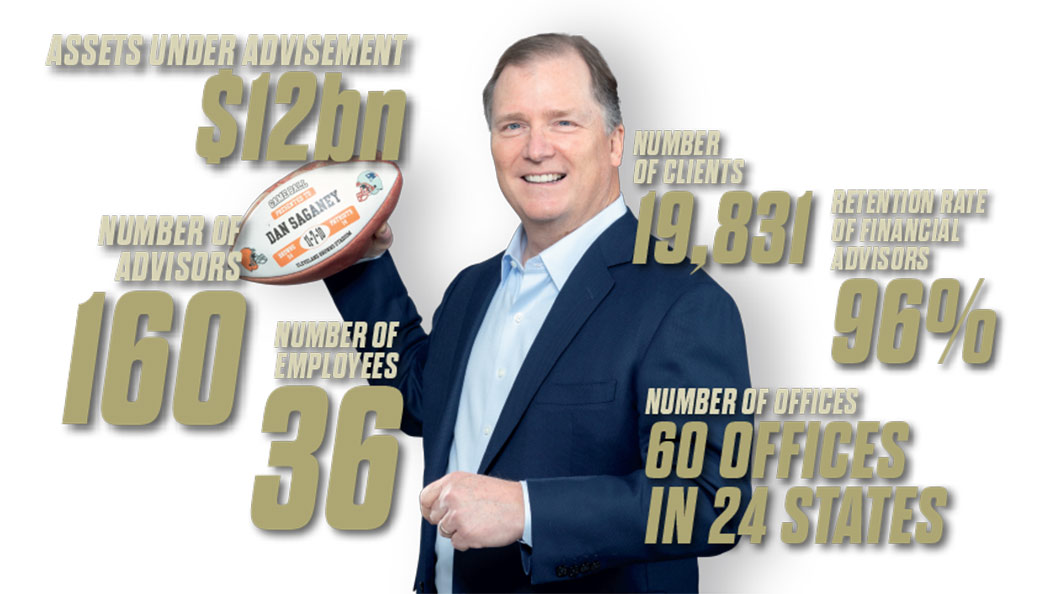 ‘I went back to what I knew,’ he said. Integrated’s CPA business went vertical.

‘Our success was such that we could plug an advisor in there, that advisor would double or triple their assets and their business in a very short period of time,’ Saganey said. ‘We were doing that over and over and over again.’

As reported by Financial Planning magazine, June 1996 – 2021, based on total revenue.